Three years ago, I wrote a blog post concerning my Oakland Raiders and the fact that they stunk so much that I was hoping for them to get even one, lone win that season. It’s amazing how quickly the Raiders have turned around, last season becoming a post-season team for the first time in 13 years, and this season, being looked at by many as a Super Bowl contender. This represents quite the change for the Raiders, who for many years were the joke of the NFL.

So what happened? They put in the work.

And by that I mean that the Raiders are a well-managed team now. Their GM, Reggie McKenzie, has done a much better job in recent years of signing free agents and drafting new players out of college. Add to that the spectacular job head coach Jack Del Rio has done in instilling confidence in the team as well as a winning attitude, and it’s not hard to see that luck had nothing to do with the Raiders’ return to excellence.

Leading this return is a QB, Derek Carr, who would rather give all the glory to God and to his teammates and coaches than to himself. He’s a humble young man, and I’d have no one else in that QB spot. Carr’s exactly the type of man who I want to see on this team, and that’s saying a lot since there was a time when the Raiders were the bad boys of football and proud of it.

Derek Carr, as he’s willing to admit, was wild in his college years. That is, until someone special to him said, “You’re not the person I thought you were.” Coming from the right woman at the right time, those words were exactly what Carr needed to hear to turn his life around. He straightened himself up and began walking on the path of Jesus with that special lady who would become his wife. Today, Carr will tell you that he’s had many experiences that have convinced him that God is working in his life. In fact, if you want to hear him for yourself, please follow this link to a recent podcast interview in which he explained his faith, how he came to it, and how he uses it to help others. That portion of the interview begins at the 12:48 mark.

This is the man I’m thankful is leading my Oakland Raiders. I love him. He’s a wonderful young man with a great attitude and a strong dedication to his belief, to his wife, to his kids, and to making the Raiders a Super Bowl-winning team. I may not be a man of faith, but I’m grateful that he is. Carr has had such a positive impact on the Raiders organization and the fans, the Raider Nation, as well. And who knows? Maybe in a couple of years, when the Raiders move to Las Vegas, we’ll find out that Carr is exactly the angel that Sin City needs. I wouldn’t bet on Vegas changing one bit, but then again, faith doesn’t rely on luck. 🙂 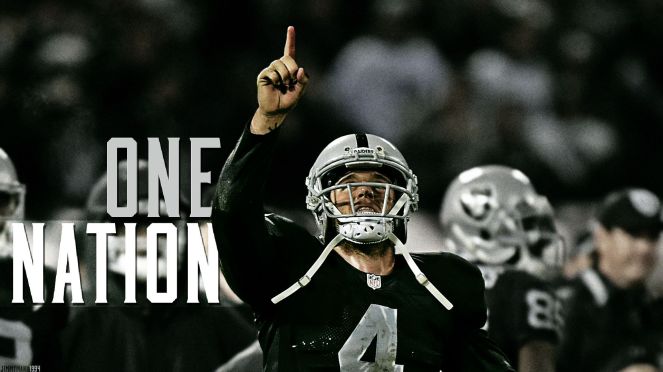